LINKS TO THE HOTTEST WEB SITES?
The evidence that primitive life may have once existed on Mars

Updated August 16th 1996 As a special supplement in the August Edition of Micscape magazine we provide a selection of Web sites providing reports of studies that primitive life may have once existed on Mars. This evidence is based on detailed studies of part of a Martian meteorite found in Antarctica.

The news broke just as the Micscape magazine was going to press, so this is just a selection of the no doubt many Web sites providing information on various aspects of this discovery.

Two images from the NASA site to whet your appetite are shown below. NASA state that 'no copyright is asserted for NASA photos', and therefore we reproduce them here with grateful thanks. Both images are significantly reduced and slightly brighter, but otherwise unretouched, images from the NASA site below. Please visit their site to view larger higher resolution images with more detailed descriptions of them. The image notes are by the Micscape Editor based on the NASA site's notes, and any inaccuracies are his! 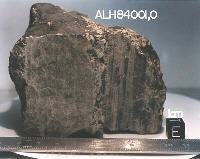 This is the 4.5 billion year old rock found in Antarctica in 1984 which was once believed to be part of a meteorite dislodged from Mars. Detailed studies of this rock have provided evidence that primitive life may have existed on Mars more than 3.6 billion years ago. The black cube is 1cm across. 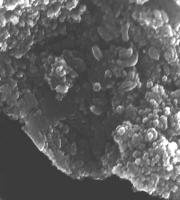 This is an electron microscope picture of a small part of the rock showing tube-like structures. The exact nature of these structures is unknown, but a possible interpretation is that they may be microscopic fossils of primitive organisms that may have lived on Mars more than 3.6 billion years ago. The largest possible fossils are less than one-hundredth the diameter of a human hair, but most are ten times smaller. Note that there were no scale bars on the original image.

We now provide links to these sites, but if access is difficult due to demand, we suggest that you make a note of their addresses and access them at a quiet 'Web period' for the US. The author had no problem at all accessing them and downloading large images in the UK at Saturday 10am local time when the US was asleep.

The full on-line scientific article of the discovery, with EM images of the microscopic evidence of the life forms, mass spectral and other chemical analysis. This paper will be published in 'Science' magazine August 16th 1996. Clicking on the in-line images gives access to higher resolution images.

Index page to a selection of NASA pages on the discovery. Includes links to the photos and press release pages below. Also includes links to the following:
Video animation related to the discovery
Information about Mars and Mars exploration
Mars Meteorite fact sheet
Audio coverage of the press conference
Statement by NASA administrator Daniel Goldin
Frequently Asked Questions

A selection of photos of the microscopic evidence for the life-forms, with brief explanatory text. Low and high resolution jpeg and tif downloadables files accessible from this page. The images above are reduced versions of images from this site. Please read their faq.html file on this site, for guidelines on the use of the photos.

The official NASA press release of the discovery. Not illustrated, but provides a more general overview than the scientific article above.

Not convinced?
The conclusions of the studies above are understandably presented by the scientists in cautious tones. A discovery of this magnitude is bound to stimulate discussion of the observations, interpretation and conclusions of the above studies on the meteorite.
Follow the debate in the Newsgroups such as sci.bio.microbiology , bionet.general , sci.astro , sci.space.science , sci.techniques.microscopy and others.
Micscape will endeavour to extend the Web resources listed above to include sites where the points raised in these debates and other scientific work on the meteorite is presented.

As a start check out Mars which has links to other work on the meteorite which does not support, but neither does it contradict, that of the NASA team.

Go back to Micscape magazine index