I first remember being shown Brownian motion in high school by the physics teacher using a microscope to observe smoke particles suspended in air in a glass cell. This is one of a number of recommended ways of demonstrating this classic experiment; others include observing aqueously suspended fine particles such as pigments (e.g. Gamboge, Indian ink) or fat globules in very dilute milk (refs. 1 - 3).  Robert Brown studied the motion after whom it takes its name, in tiny particles released from the medium within pollen grains (not the pollen grains themselves which are too large to show the motion, ref. 4).

I was browsing eBay recently and noticed a used Brownian motion smoke cell which I purchased for a few pounds as was interested in comparing its effectiveness with other techniques tried; my preferred method as a hobbyist is to use extremely dilute milk as it is effective and fairly easy to set up. (See Micscape 'Home in close-up' article.)

The smoke cell purchased was the 'Whitley Bay' pattern made by Griffin & George Ltd, which seems a popular design and is still available new from educational suppliers. There has been speculation online as to why it was apparently named after a small town on the north east coast of England (ref. 5). Was the designer based there; or perhaps an allusion of the smoke cell's lighting to the town's offshore lighthouse? I'd be interested to hear from any reader who knows why.
Note added March 5th 2014 and updated March 19th 2018: Thank you to a reader Albert and also Kate Le Sueur who both note that it was called the Whitley Bay Smoke Cell because it was designed and invented by the physics department at the Whitley Bay Grammar School now the Whitley Bay High School.

The cell is shown below. It is essentially a self contained lamp, lens and smoke cell to observe the bright smoke particles under a microscope against a dark background. It uses the 'festoon' type bulb* 12V 3W, to shine light through a solid glass rod to give a thin beam of light in the small cell. As smoke particles pass through this beam the particles are seen as white specks undergoing motion, both Brownian and other motion like convection. *The bulbs are readily available as they are used in e.g. some older car door courtesy lamps.

Cell with light guard on and smoke cell removed and sitting on this cover to show the cell more clearly. This example has been well used as cell has tarry deposits in base. The instructions note the importance of regularly cleaning the cell walls.

Some practical disadvantages of both the design and its ability to unambiguously demonstrate Brownian motion were discussed by Marcus Rowland, a head science technician at a London school, in a 'New Scientist Forum' article 'The great Brownian motion swindle' (ref. 6), which prompted some letters from readers (ref. 7).

Having experimented with the cell for some time, the view of the smaller smoke articles brightly seen in motion against a black background is quite striking although simpler methods seem better at more clearly demonstrating Brownian motion.

Observations of the smoke cell design and its use:

There a number of resources online that describe the cell's use, e.g. on the 'Practical Physics' website.

It's suggested that paper drinking straws or corrugated paper is set alight then extinguished to 'pour' smoke into the cell; although the author rolled up some paper round a '00' paintbrush handle and taped in middle, then remove the 'former', and used this. Once the coverslip is put on, the smoke can be studied for some while, 5 - 10 mins at least from the author's trials.

A coverslip can easily slip off the top of the small cell, and the cell in the author's example was also not very tightly held at its base; disadvantages also noted in Rowland's article. A few tiny dabs of eg Vaseline on the cell's top face help prevent the coverslip shifting (not water which tends to cause condensation in the warm lighting.)

Tracing paper in plane of cell showing how the glass rod creates a thin beam of light. Graduations are in mm.

Using tracing paper, the lit area is about 4-5 mm below the top of the cell. This limits the objective used to those that have at least this working distance plus ideally a few more mm for safety. A 10x objective is recommended, and the author's Zeiss 10X NA0.22 has sufficient working distance, but the author had a preference for the Zeiss 6.3x NA0.16, as the wider field showed more particles and gave a safer working distance.

As the online resources recommend, starting with the objective by eye very close to the coverslip then focussing upward until the particles are seen works well.

The lighting is not that strong but the bright smoke particles can readily be seen by eye with typical 10x eyepieces; a slightly darkened room helps. To video the motion the author used a typical domestic C-mount monochrome security camera, sensitivity 0.05 Lux, which was just sensitive enough to record the particles in motion. Strong LED lighting is now available in the festoon bulb format for a few pounds, perhaps these bulbs may be more effective. Such lamps would also not emit infrared so may help minimise convection in the cell.

The random motion of the smaller smoke particles can be seen but the large volume of the cell relative to the particles and tungsten side lighting can introduce motion by convection as well. The narrow depth of field of the objective and tall cell also means that a given particle is only seen for a short time before they drift out of focus.

From the author's past and more recent comparative trials using a drop of very dilute milk on a microscope slide with cover slip, this method does seems to offer a number of advantages to the smoke cell:

Apart from the microscope no special apparatus is needed, just a microscope slide, coverslip and some simple tools (see procedure below, click image).

A downloadable guide in Acrobat pdf® format by the present author showing the steps to study Brownian motion in dilute milk, suitable for a student.

If the coverslip is temporarily sealed along the edges with Vaseline, the initial currents die down in a few minutes and the fat globule motion by inspection is almost entirely Brownian.

The variation in sizes of the fat globules also allows the motion of smaller globules to be compared with that of larger globules.

Using normal transmitted light with the microscope allows much easier visual or video studies to be carried out.

Smoke cell, left 6.3x objective with 5x eyepiece, right 10x objective with 10x eyepiece, (2 Mbyte and 1 Mbyte clips, 30 secs each).
In the author's trials, motion by convection varied depending on the focus plane, the above clips used focus planes to mimimise such motion.
A 10x objective is suggested in the maker's instructions but the depth of field becomes quite small with smoke particles not being observed for long before moving out of focus. A 6.3x objective was better in this respect; the lefthand clip above shows some motion by convection (along y axis in clip) in addition to Brownian motion.
Smoke was generated with coiled paper which gave particles of similar size, thus not allowing a study of the effect on Brownian motion on different sized particles. Fat globules in milk is better to demonstrate this aspect.

Very dilute milk in water: temporary sealed coverslip.
Left: brightfield, (2 Mbytes, 27 secs), optic mag 400x, (Zeiss 40x NA0.75 objective, 10x eyepiece.)
Right: darkfield, (8 Mbytes, 42 secs), optical mag 320x, (Zeiss 16x NA0.4 objective, 10x eyepiece, 2x Optovar.)
Motion by convection is virtually eliminated if the slip is sealed well and allowed to equilibrate for a few minutes; allowing Brownian motion to be more readily studied. The thin liquid layer keeps more fat globules in focus so can be viewed for longer. The difference in motion of larger and smaller fat globules can also be seen. To minimise the liquid thickness, the slip can be sealed by immersion oil instead of the thicker Vaseline.
Some experimentation is worthwhile with the milk dilution, too little and the fat globule density confuses the study (and gives glare in darkfield), too dilute and there's not a good range of particles. The concentration of the milk in above clip is a little on the high side for clear darkfield.

Film clip details, 3 Mbytes, 10 secs, Cinepak Codec compression: Very dilute milk taken with a Russian 40X (N.A. 0.65) achromatic objective in bright field illumination on a LOMO Biolam. The image was projected into the video camera (Panasonic CL350 430 line resolution) without an eyepiece. The droplets range in size from about 0.5 to 3 µm (1 µm is 1/1000th of a millimetre). The milk dilution was about optimum, with a good range of different sizes to study individual particles without an excess cluttering the field. Video clip from an earlier article 'Microscopy around the home'. 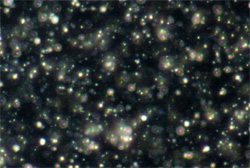 In transmitted brightfield, the effect is perhaps not as striking as the bright smoke particles against a dark background in the smoke cell, although if the milk is extremely dilute, darkfield can be used with the milk for a similar effect. Darkfield can be readily setup on many student microscopes likely to be in schools using a suitable patchstop in the condenser filter tray.

A Google search suggests that dilute milk or other aqueous suspended solids are widely used for the demonstration, including statistical studies of particle movement.

Smoke cell cf very dilute milk, sumary of pros and cons.
(Personal view based on author's trials as a hobbyist who does not have firsthand experience of their use with students.)

Comments to the author David Walker are welcomed.

1) Google Book Search - early mentions of using gamboge suspended in liquids to study Brownian motion in 'The Treasures of Botany', 1866 and 'The Popular Science Monthly' 1915.

2) Google Book Search - early mention of using Indian ink to demonstrate Brownian motion in 'The Principles of Bacteriology a Practical Manual for Students and Physicians', by A C Abbott, 1915. (To distinguish this motion from that of live bacteria.)

4) 'Brownian movement in Clarkia pollen: a reprise of the first observations' by Brian J. Ford. The Microscope, 1992, 40 (4), pp. 235-241. This fascinating paper describes how Robert Brown's observations were repeated using one of Brown's original microscopes. This demonstration was carried out to dispel the suggestion that Brown's microscopes were not good enough to show the motion. The paper also discusses many aspects of Brown's life and work. This paper is on Brian Ford's web site.

7) 'Browned off' - readers' letters (nos. 1, 3 and 5 in link list) in later issues of New Scientist in response to above article.

8) 'Brown's Brownian motion revisited' Science News, August 15, 1992. A recent controversy between scientists as to whether Brown observed the motion.

© Microscopy UK or their contributors.

Published in the June 2009 edition of Micscape.

Please report any Web problems or offer general comments to the Micscape Editor .